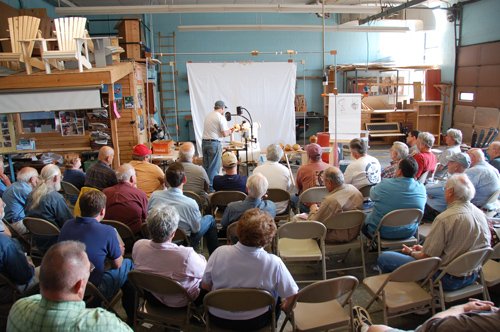 With an attendance of 350, a great group of professional demonstrators (nine of whom are members of the Guild or GSWT, and including the executive director of the American Association of Woodturners as well as a past president of the AAW!), a large trade show, and the always amazing Pinkerton Academy facility and staff, the symposium delighted and amazed. 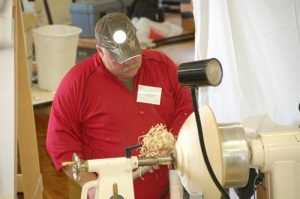 As usual, a large group of dedicated volunteers made the day happen with almost no hic-cups. A year’s worth of planning together with the experience of five previous symposia certainly helped smooth the way. It also appears that there will be record profits which will be split as usual three ways: the Guild Scholarship program, the Pinkerton Trades programs and the Guild general funds.

With a large instant gallery, people could see the work of Guild members along with that of the demonstrators. Attendees came from all over, including one from Israel! A large raffle was very popular and contributed substantially to the profits. There will be a dozen DVD’s created for our library as well as for purchase so that almost half of the demonstrations can be viewed again.

Specific thanks need to go to Jack Grube, Peter Bloch, Dave Belser, Lindsay Freese, Dick Batchelder, Marcel Durrette, Bob DeAngelis, Jerry Burt, Donna Banfield and DJ Delorie for all their help. The Seventh Symposium is only three years away – put it on your calen- dar now!

The Guild held its second Youth Turning Symposium the day before the New England Symposium and it too was a great success. With more than 200 attendees from four states ranging in age from elementary school to college, this day was inspiring.

Five professional demonstrators each did three rotations within the school day so that everyone got to see some wonderful turning. At lunch a talented 9-year-old demonstrated at the lathe while every- one munched on free pizza! With a grant from the AAW and a generous anonymous donation, the day was mostly self-supporting and we were even able to pay the transportation costs for three of the high schools that came.

Once again, the Pinkerton staff and facility must be thanked for all their tremendous support. Most impor- tantly, the Guild’s mis- sion of education was very well served on this day and lots of young people went away inspired about woodworking. One of the attending high schools plans to host a youth sym- posium next spring, and hopefully the Guild will be able to help them keep the ball rolling (or the lathe spinning!).