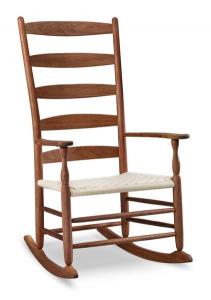 For this year’s Summer Trip, the Guild will be visiting Tappan Chairs in Sandwich, NH.  Tappan Chairs is a business specializing in the ladder back style of chair, the designs of which have evolved directly from mid-19th century patterns used by Daniel Tappan and his children.  The seventh and latest owner in this nearly two-hundred-year-old dynasty of stewards is our host Adam Nudd-Homeyer.

Tappan Chairs has been located in historic Sandwich for its entire existence, and a touchstone of the business is the continued use of a range of historic tools, machinery, and techniques that have been there since the earliest days.  The oldest piece is a massive, wood-framed hand lathe, whose ways are fashioned from nothing more than a pair of hewn timbers pinned together. Likely dating to the mid-19th century, this lathe is still used in hand-turning finials and front posts of arm chairs, and a 19th century C.H. Cowdrey pattern/back-knife lathe is still used to rough-out the taper on every post.  Over the past two centuries each generation of ownership has acquired and incorporated equipment, much of which is now vintage. This includes a very rare and incredibly useful Versatile Saw, made in Henniker, NH in the 1950's and a couple of vintage Shopsmiths--one an original manufacture back to the 1940's, and another from the late 1950's or early 1960's.

Our tour and presentation will be taking place at Tappan Chairs' new location at 6 Skinner St. in downtown Sandwich. This event will in fact be occurring as Adam completes the transition of his business to this new location. Up to this point, he was effectively relegated to "cottage industry,"  being nested in an old uninsulated, unheated carriage house attached to his old farmhouse.  This “new” location is itself is a historic Sandwich structure, dating back to the 1830's. Until ca. 2008 in fact it was nearly continuously operated as a general store, and also was the birthplace of the Sandwich Home Industries, the original forerunner to the League of NH Craftsmen. The new location will have a workshop where the chairs will be cut, turned, assembled, and finished, and a museum to the history of the business.  His showroom will be in an adjoining structure that was an undertaker and casket shop in the mid-19th century, and later became a revival church.

It is likely that there will still be a lot in the works at the time of the tour, although Adam expects to have all major pieces in place.  We will see his two oldest pieces (lathes dating back to the 1800's) as well as other more recent, but still antique curiosities.  He will have both physical as well as media presentations showing and discussing how the chairs are made--which is still largely based in historical greenwood methods - and images of the machines doing their stuff. He will detail the development of his collaboration with the last living Shakers in Maine, for whom Tappan Chairs is the only authorized chairmaker in the world. We will see the actual prototypes of those chairs, as well as a number of historical 150+ year old examples of Tappan Chairs, and even the patterns used to make them (old story sticks and templates!).

Afterwards, there is a great cafe, and also a tasty pub right up the road on the town green where people can get a snack or grab a lunch.