The Cartouche award recognizes an individual whose achievements best reflect the mission of SAPFM as reflected in the lifetime achievement of the recipient.

Traditionally, the award would be presented at the annual Cartouche Banquet held in conjunction with the Colonial Williamsburg Working Wood in the 18th Century conference in January. This year, because of the COVID virus, we cannot yet announce details of the award presentation (several alternatives are under active discussion) but we will update the membership and general public as soon as possible.
‍David Lamb’s career started in Canterbury, NH almost 50 years ago when his family moved to Canterbury Shaker Village to run the Shaker museum there. Living within the historical setting and having a personal friendship with the six remaining Shakers gave him a unique insight into that segment of American folklife and the Shaker artistic and architectural output. Within a year of moving to Canterbury David was invited to be an apprentice with next door neighbor, Alejandro de la Cruz, an accomplished and traditionally trained cabinetmaker from Madrid.

The classic training David received over the three year period was thorough and focused on benchwork and all hand techniques and long discussions on design, proportion, aesthetics and the business of being a craftsman. Heavy emphasis on traditional American and European technique and form predominated the shop’s output.

Contemporary art school was next at Boston University’s Program in Artistry with Jere Osgood and Alphonse Mattia as teachers for his degree in Applied Arts. Thinking in non-traditional ways of creating form and aesthetic ideas was instrumental here.

It is these three aspects that drives David’s design and work; classical form and integrity, Shaker directness and function and contemporary rethinking of graphic aesthetic and methods to accomplish them. In addition to these exposures, nature has played a huge part in what motivates David’s design, both in form and detail by constantly drawing flowers and plants, carving them and incorporating these and other natural aspects in his work.

During his career he has been a 40 year juried member of the League of New Hampshire Craftsmen and has served as juror for over a decade. He is a founding member of the Guild of NH Woodworkers and regular contributor to their highly acclaimed Journal and is a founding member of The New Hampshire Furniture Masters Association where he has served as chairman for three terms. He was appointed New Hampshire Artist Laureate by Gov. John Lynch for two terms from 2010-2014. David also was a participant presenting traditional furniture making at The Smithsonian Folklife Festival representing NH in 1999 in Washington, DC.

Throughout his career as a full time furniture maker he has had innumerable furniture making opportunities building the highest level of historical work and just as important, pieces that rethink what tradition could mean. Collaborations with other artists and craftsmen play a big part in David’s work but also the insightful feedback and exceptional contributions from his wife, Janet. 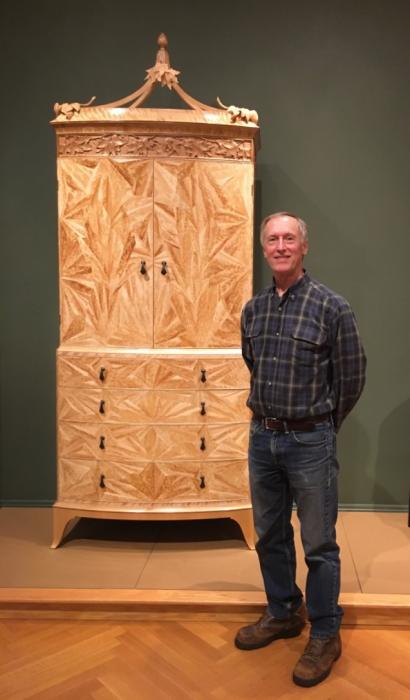