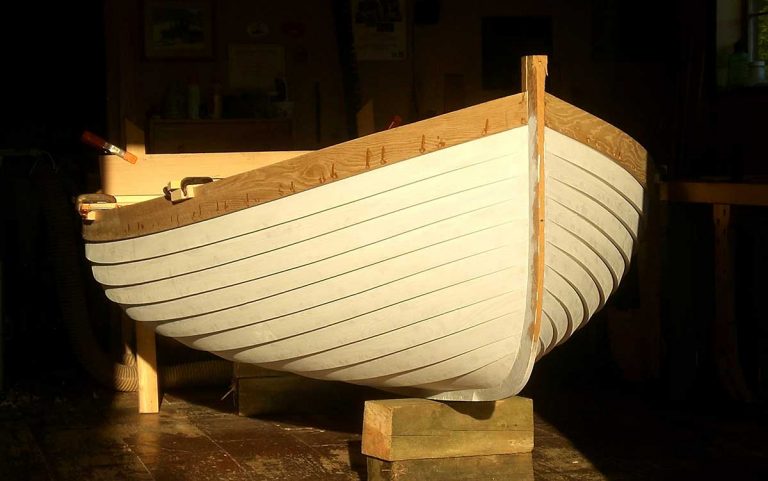 The objective of the Boat Building subgroup is to promote, present and share information about all things wooden boat!

The goal of our meetings is to cover a wide range of boat building topics and venues. We have visited boatbuilders, explored boatbuilding lumber, and built or restored boats for raffle. Our favorite meetings are visiting the shops of our members to observe, learn about, and assist with their current projects.

New England is and has been, for many hundreds (probably thousands) of years, an important center of wooden boat building.

Indigenous “New Englanders” – Sokokis, Pennacooks, Assagunticooks, Kennebecs, Penobscots, Passamaquoddies, and the Micmacs of Acadia – built wooden boats of birch, spruce, and pine to ply inland and coastal waters. Unfortunately little is known about Native American watercraft prior to invasion of the “New World” by Europeans.

From 1685 ’til the first shot of revolution, the monarchs of England wanted to ensure that the very best of New England’s giant white pines were kept for official use. Since all of New England was considered “Crown Land” of the British Empire, the King took control of the tallest and largest of these great trees. Each one was emblazoned (three hatchet slashes) by the King’s Royal Surveyors with a mark that became known as the King’s Broad Arrow. This signified property of the King and the trees were to be harvested and used solely for building ships for the Royal British Navy.

The frigate Raleigh, built at Portsmouth in 1776, as one of the first warships sponsored by the Continental Congress for a new American navy, is the centerpiece of the contemporary New Hampshire State seal.

Working the “fish rich” waters off the New England shore fueled the booming boat building industry of the 19th century. Cities like New Bedford, Gloucester, Bath, Portland, Portsmouth, and others became centers for boat building as well as fishing.

During the latter part of the 19th century and the early part of the 20th century, as fortunes were made and leisure time became a reality for some, boats evolved into play things for the rich. Yacht clubs and sportsman’s camps were established along the coast and on many of New England’s lakes.